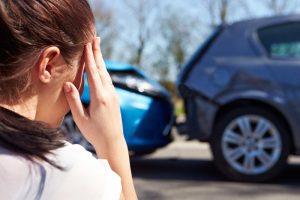 When most people think of or hear the word whiplash they immediately think of injury associated with a car accident. According to Webster it is:

While the definition is simplistic in and of itself, it does not explain what happens as a result of the whiplash injury. Whiplash is more specifically called a sprain/strain type injury. Sprain/Strain is what happens when the head and neck are suddenly thrown backwards then snap forwards. A sprain is the over pulling and tearing of a ligament (holds bone to bone) in this case the ligaments holding one vertebrae to another. A strain is the pulling and tearing of a tendon (attaches muscle to bone). Both sprains and strains involve multiple ligaments and tendons (muscles). The multiple ligaments and tendons are usually damaged to different degrees. Once the tearing occurs, inflammation sets in immediately and pain can be experienced right away or sometimes a day or two later. Over time the body will heal the inflammation and the pain might go away, but without intervention it will leave scar tissue that will interfere with the bodies ability to function at one hundred percent. The scar tissue inhibits the joints natural ability to lubricate itself leading to its breakdown. Chiropractors rehabilitate the joints and the muscles there by helping heal the sprain/strain (whiplash) caused by a car accident.

For more information on this see Dr. Beasley’s articles, he is a chiropractor out of Everett WA with over 2 decades of experience.